Would Love for You to Join Me...

I know my time with this blog was brief compared to my previous blog home -
and I am thankful for the time here and the past few years of growth that Abba has had for me.

That being said, I have decided to move my blog, once again.

I believe it is time to have a blog home that is a little more well-rounded. I love talking about Torah and about my family - but my life consists of so much more. I want to broaden my horizons and begin anew as YHVH continues to teach me how to live a balanced life during my pilgrimage here.

Posted by Christina at 8:24 PM No comments:

Chanukah is one of those topics that a lot of various and contradictory information can be found.
Even the word itself cannot be resolutely determined in its spelling (Chanukah, Hanukkah, etc...).

I 'happened' upon these videos on Facebook discussing if /where Chanukah is talked about in Scripture.

There are two videos posted below - about 15 minutes each.
I found it interesting to hear some of the points/passages shared in these videos...
and I look forward to researching them even further (as we should with all things).
I believe they are worth watching... and sharing...

This past Shabbat, we enjoyed reading in Bereshith (Genesis), chapter 28.
The hidden, deeper meanings of Scripture
never cease to amaze us when they are revealed...
nor should they ever.

"And he came upon a place and stopped over for the night, for the sun had set.
And he took one of the stones of that place and put it at his head,
and he lay down in that place to sleep." - verse 11

Did you know that the Hebrew word for 'stone' in this passage is "eben"?
Interestingly, 'ben' is the Hebrew word for son.
A stone... This stone Ya'acob laid his head to rest on
was a picture of Mashiach (Messiah)...
and Ya'acob (Jacob) rested in him.

"And he dreamed and saw a ladder set up on the earth,
and its top reached to the heavens, and saw messengers of Elohim
going up and coming down on it." - verse 12

A ladder... rolled out like a vertical scroll (like a Torah scroll)...
from the earth to the heavens,
connecting man and his Creator.
Yet another picture of Mashiach (Messiah).

"And he was afraid and said, "How awesome is this place!
This is none other than the house of Elohim,
and this is the gate of the heavens!" - verse 17

The gate... This gate, opening, door of the heavens...
Another picture of Mashiach (Messiah).
He is the door of the sheep... the way unto the Father.

"And Ya'acob (Jacob) rose early in the morning,
and took the stone that he had put at his head,
set it up as a standing column,
and poured oil on top of it." - verse 18

The anointed... The stone, a picture of Mashiach (Messiah),
is anointed with oil... a prophetic picture.

Mashiach (Messiah) in the Torah?
You betcha!

May we do likewise.

The ladder - We're either going up or down.

Posted by Christina at 10:31 AM No comments:

The Power of Words 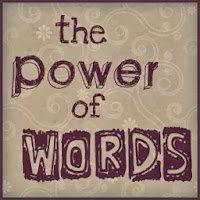 " In Parasha B'reisheet (Genesis 1:1-6:8), we learn many important lessons, but none more powerful and enduring than the significance and holiness of words and speech. The Torah teaches us that YHVH created the world through ten utterances: through Divine speech. With each holy command, our universe was formed. YHVH implanted this gift of speech within man. Of all earth's creatures, only humans are endowed with the ability to verbally communicate intelligently. We must be ever mindful that, even as Elohim created through "words", on our own level, we too create through words.

Time and again, the Torah cautions us to be very careful with that which escapes our lips, for, as King Solomon tells us, "Death and life are in the tongue." Before speaking, stop for a moment and consider how your words impact on others. What sort of environment and relationships do you create with your speech? Do you speak to your family and friends with love and respect? Do you think about what you're saying before you say it and the effect that it will have on those with whom you communicate? How careful are you with that which escapes from your lips?

There are more commandments in the Torah in regard to speech than to any other mitzvah: seventeen negative and fourteen positive mitzvos. It is through speech that we signaled our committment to our Covenant at Sinai when we proclaimed, "Na'aseh V'nishma - We shall do it and we shall study it." It is through speech - prayer - that we speak to Elohim on a daily basis, bringing a positive spiritual influence into the mundane. Yet speech can have terribly negative effects as well: It was through speech that Hitler committed the most unspeakable evil ever to be perpetrated upon mankind. He himself never lifted a weapon; he used his lethal tongue to incite the world to hatred and slaughter. Indeed, "Death and live are in the tongue."

Think before you speak and ask yourself, "Will my words generate light or darkness, love or hatred, blessing or curse?" The choice is your to make. Use your Divine gift of speech carefully and wisely, in the service of the Almighty. "

- Torah for Your Table - Rabbi Yisroel and Osher Anshel Jungreis

We've just finished celebrating Sukkot this year!
It was a blessed time! What a joy YHVH's Appointed Times are!

Next year in Jerusalem!

﻿
This past week, we were blessed to celebrate the first of YHVH's fall feast days,
Yom Teruah - known commonly as The Feast of Trumpets.

And יהוה spoke to Mosheh, saying,
Speak to the children of Yisra’ĕl, saying,
‘In the seventh month, on the first day of the month, you have a rest,
a remembrance of blowing of trumpets, a set-apart gathering.
Leviticus 23:23-24

Blessed are You, YHVH Eloheinu, King of the universe,
Who has kept us in life, sustained us,
and enabled us to reach this season.

May we hear the sound of His calling!

Hear, O Yisreal, YHVH our Elohim, YHVH is One.
Blessed be His esteemed Name
Whose Kingdom is forever and ever. Amein.

Life is full of seasons.
Some remain longer than others.
Some seem to go by as quickly as the wind.
But... seasons change...
And there is much to glean,
much to learn, and much to do
in each season...

We have entered the season of extended family living,
among other various seasons that continue to change
in other corners of our lives...

This summer, we not only welcomed our adult daughter back home...

But, also, welcomed my parents to live with us...


We have a full house!

Baruch HaShem YHVH!
He is good... all the time.

To every thing there is a season, and a time to every purpose under the heaven
- Ecclesiastes 3:1
Posted by Christina at 9:59 PM 1 comment:

Welcome!
I'm Christina...
Blessed Wife
and Mother.
Home Educator. Domestic Engineer.
Book & Tea lover.
Daughter of the Most High.
Seeking Truth in His Word - His Torah
setting my heart to hear, guard and do
what He has lovingly instructed...
... because I love Him...
because It is my Life.

Recommended Resources Here at It Is Your Life Storefront...